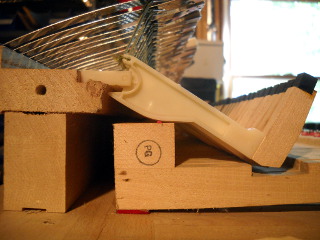 Of all the components that make up the action of a Rhodes, perhaps none is more important to the feel of the keyboard than the key pedestal and hammer cam. The interaction of these two parts is responsible for causing the hammer to strike its tine, preventing the hammer from bouncing on its return and limiting the downward motion of the key. Several different designs of both pedestals and cams were used at different periods in the production of Rhodes pianos. Of the various pedestal designs, it is generally agreed that those which display a flat profile or one that falls away in the front produce an undesirable playing feel. Pianos with such a design tend to feel both heavy and mushy providing no distinct sense for when the hammer is flung upward or when it returns to its stop-lock position. Unfortunately, flat-top pedestals were installed at the factory for much the first half of the 70’s.

Luckily, the cure for poorly-designed pedestals is a simple and inexpensive one. Commonly called the Miracle Mod, its effect on the action is such that the name is not considered hyperbole by most. Opinions vary on the exact implementation of the modification. Generally speaking, it involves the addition of a small bump to the front of the key pedestal. The shape and location of the bump though are matters of some dispute among practitioners. For the four installations I’ve done, the half-round bumps supplied by Vintage Vibe were used and my placement was guided by their YouTube video on the subject as well as information from the Electric Piano Forum.

The Vintage Vibe video linked above would lead one to believe this job can be done without having to remove the pedestal felts. The piano they used was built around 1976 during a period when Rhodes installed the felt onto the hammer cam rather than the key pedestal. With a piano of that vintage, the bump can indeed be installed onto the pedestal and the felt left on the cam but I wouldn’t expect such an arrangement to hold up for very long. Even using a glue formulated specifically for the job, it’s difficult to reliably adhere such a small piece of plastic to a wood surface. Installing the felt on top of the bump helps a great deal in securing everything in place. Since there isn’t room for two pieces of felt between each hammer and pedestal, the material glued to the hammer cams must be removed. When I removed the felt from the hammers of two pianos from 1976, I found naphtha made the job fairly easy. With only a little effort, I was able to remove every trace of the felt’s adhesive without damaging the plastic hammer. I struggled to remove the felt from the pedestals of the 1973 I’d worked on previously. After trying several less aggressive methods to loosen the glue, I finally settled on acetone. The felt’s glue responds very well to acetone but this is also true of the plastic key tops which are instantly disfigured from contact.

Changing the shape of the pedestal with this modification affects the action in two ways. At rest, the hammer cam sits atop the small bump, reducing the contact patch and thus the amount of friction between the cam and the pedestal and changing the leverage involved in causing the hammer to move upward. After the tine strike, the bump helps enforce the action’s stop-lock mechanism by adding a second point of contact to more effectively catch the hammer on its rebound. It is this stop-lock position that I use to find the appropriate location for the bump. To make the job easier on my current 1974 piano, I first removed the harp supports giving me a clear view of the hammer and pedestal. With the first key held down and the hammer at stop-lock, I placed a plastic bump on the front of the pedestal and pushed it back until it made contact with the hammer’s cam. I then marked the side of the pedestal with a pencil and removed the key from the frame to strike a guideline across the face of the pedestal. Of the two sets of components, the hammers maintain a more consistent line across the length of the piano than the key pedestals. Installing the plastic bumps by measuring a set distance from the edge of the pedestal will likely result in a more irregular response than if the measurement was made relative to the action rail. In order to draw a reference line across the entire set of keys that would remain parallel to the action rail, I located the proper position of a second bump at the opposite end of the keyboard from the first. Then  the action rail was removed and with it the hammers and dampers that blocked access to the rest of the key pedestals. With what in my shop passes for a straightedge clamped down at the marks made on the first and last keys I drew the lines across the remaining pedestals.

Since the felt to be glued on top of the pedestal provides all of the holding strength needed to secure the bump in place, I use only a very light application of thin super-glue to position the plastic until the job is complete. A small, sharp awl poked into the top of a bump provides just enough grip and control to carry and place the piece while still allowing it to be released when the time comes.

I don’t know what type of glue was used at the factory to install the various pieces of felt that are included with each key. Past experiences removing the material have suggested that what was used to secure the pedestal felt is not the same adhesive used on the guide pin bushings. Though I’m certain it wasn’t used on any part of a Rhodes at the factory, I’ve opted for hide glue for both the bushings and pedestal felt. Hide glue sets quickly and will not allow the parts to creep over time. A clamping caul made by cutting a notch into the side of a spare tine block ensures a tight fit around the bump.

The official shop manual recommends using silicone spray to lubricate the felt after installation is complete. The problem with such a lubricant is that it typically includes acetone. The acetone soon evaporates but until it does, it can soak through the felt and attack most glues. Also, if the key is installed before the acetone has completely evaporated, it will react with and begin to melt the plastic hammer cam. To avoid these issues, I use dry, powdered Teflon sprinkled on, then brushed into the felt.