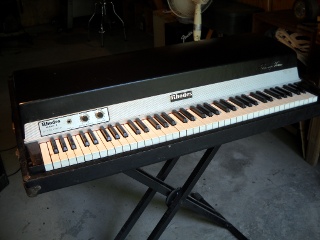 This is the third consecutive piano that I’ve purchased that was built in the year 1976. This was the year when the all-plastic hammers first made their appearance. Prior to this, wooden hammers were bonded to plastic shanks to make what’s commonly called a “hybrid” hammer assembly. I don’t have an affinity for this particular model; it just happened that the last three pianos in my price range came from the same year.

I’m not the first to have worked on this piano. The original Tolex had already been replaced with some sort of wrinkle-patterned vinyl.

During a quick run-through of the keys, it sounded as though there were a significant number of dead pickups. If so, these will be the first dead Rhodes pickups I’ve seen that didn’t come from the factory wrapped in white tape.