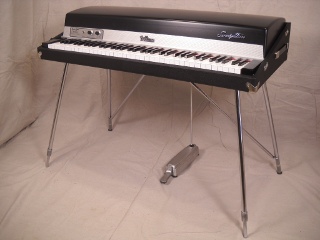 A fellow up in Columbus purchased this piano on ebay from a seller in Florida. When it arrived, he discovered its condition had been misrepresented in the ebay listing. He expected a fully-functional piano that was ready to play but instead received a collection of parts barely contained by a disintegrating cabinet. Not interested in investing the time and money needed to resuscitate the broken down piano, he contacted me to see if I wanted to salvage it.

The fact is, were it not for several broken hammers which may have been the victims of rough handling during shipping, the piano may have actually been playable. The action is very sloppy and everything is covered in a substantial amount of filth but when you press most of the keys, sound does come out of the amplifier speaker.

This piano is similar to 32766, a 1973 that was recently sold. The action assembly is wood and the hammers are hybrid – half wood, half plastic. Unlike the 1973, the key caps are not skirted. That is, they only cover the tops and fronts of the keys but do not extend down the sides. They appear to be two-piece caps as the fronts are much more yellow in color than the tops. Also unlike the ’73, the cabinet edges are beveled all around rather than flattening out in the front. Curiously, while the exterior logo and what’s left of the namerail logo both include “Fender”, the badge on the harp only says “Rhodes”.

I was very glad to see that the tone bars and tines are in excellent condition. The broken hammers will need to be replaced but most everything else can be repaired and cleaned up. Although it came with legs (but not braces), they may be too far gone to be repaired.