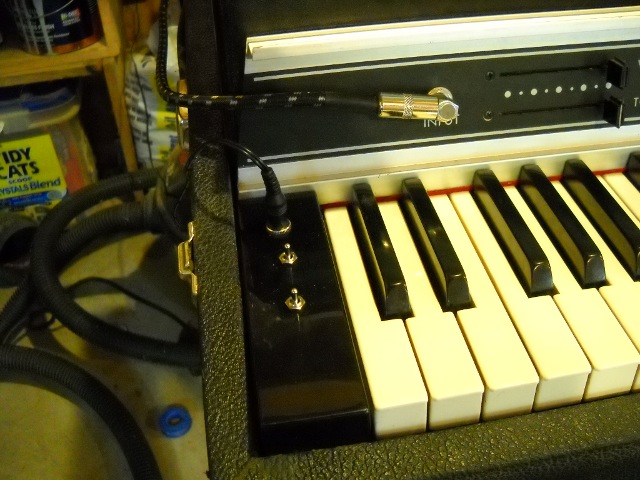 I’ve always been pretty happy with the tone of my Fifty Four. With the right voicing and through the right amp, it produced a sound that could hold its own amid other electrified instruments. That said, I’ve considered it to be lacking the range of harmonic content that could be heard from a full Suitcase model. Only on the very hardest of strikes are you ever rewarded with a hint of the crunch that gives other models so much character. Vintage Vibe’s new Tine Bomb Preamp is designed to help make up for the shortcomings of the Stage’s passive electronics by fattening up the sound both in breadth and strength.

The Tine Bomb arrives with everything needed to retrofit a standard Stage Seventy Three with no soldering and nothing more than a screwdriver and a drill with a 1/8″ bit for tools. The supplied RCA patch cable, tone and volume pots and 1/4″ jack are drop-in replacements for the existing electronics. The new volume pot is also the power switch for the preamp. Unfortunately the new components are not matches for a Fifty Four which features fader-style tone and volume controls.

The preamp is powered by a 24 volt DC wall-wart transformer. A barrel-style power jack comes mounted in a replacement cheek block. I debated for a while whether to use the supplied cheek block or remount the jack in the original block. At my day job, I’m frequently reminded of the value of original components once an instrument moves from being old to being collectible and I believe Rhodes pianos are already beginning to make that transition. The new cheek block was exactly the same dimensions as those from both the Fifty Four and my 80’s Seventy Three although the plastic-keyed Seventy Three fastens its cheek blocks with a tab rather than a screw in front. The replacement block was not as dimensionally consistent though and the sides cupped inward a little bit. Once installed, this probably wouldn’t be noticeable. Although not for that reason, in the end I decided to re-use my original block.

Since I was going to have to do some rewiring anyway, I decided to add a few more options to the setup at the same time. The main feature I was interested in was the ability to bypass the preamp but I also wanted to be able to select through which tone control the sound would pass. The Tine Bomb is pre-wired using a choke rather than a capacitor for the tone circuit. I’m not familiar with the effect produced by a choke and I was concerned it may not work as intended when bypassing the preamp. To put all of this together required the assistance of two double-pole, double-throw mini toggle switches (actually, the tone selector only needed to be single-pole) and a little shielded four-conductor wire. The project also gave me my first chance to try out my new soldering rig.

I first drew up some fairly crude wiring diagrams to both figure out the workings of the old controls and also plan the integration of the preamp. The switches and power jack were wired and installed first. The power leads connecting the cheek block jack with the preamp include a connector plug allowing the two to be easily separated. This allows the nameboard to be removed from the block without having to cut any wires. Unfortunately, I didn’t consider this convenience when drawing up my plans and will have to come back later and upgrade the installation.

Update: I feel I should note that the wiring diagram in the picture linked in the post is not complete or correct. I didn’t expect it to actually be legible in the photo. It doesn’t include the tone control switch and it’s missing a ground connection on the volume control.

I also didn’t plan for the block of wood used to mount the cheek block to the key frame. The wood obstructs most of the space inside the hollow cheek block and makes wire routing tricky. Luckily just enough room remained to accommodate the electronics and with a little finagling, I was able to keep the wires from being crushed on their way out the back.

The preamp itself mounts to the nameboard by a single screw through its heat sink into an 1/8″ hole in the base of the rail. If the hole in the rail is drilled at the proper location, the edge of the preamp’s circuit board butts against the rail keeping things from pivoting on the single screw. I didn’t really pay attention to the instructions when I chose a location for the hole in the rail. Although I positioned it as close to the output jack as I could, it still only barely avoids being hit by the harp frame. Had I read the instructions, I may have realized I was supposed to orient the preamp vertically rather than horizontally. It seems fine as it is but I may change it when I add disconnects to the new wiring.

Though my karma account probably took a huge hit for it, I was happy to find everything working properly when I finally plugged it in. The new sound was definitely fuller but it was mostly LOUD. My little Kustom KLA-10 practice amp was not able to handle the signal cleanly unless it was reigned in significantly at the piano’s controls. My Fender Stage 160 seemed much more tolerant of the hot signal and produced a clean but ear-bleedingly loud sound even at the lowest volume settings.

The difference between using the capacitor and the choke for tone control is significant. The choke is supplied as a “bass cut” to help bring the sound out of the mud if necessary. I found it useful as a way to tame the signal without having to drop the volume so much.

I’m not a tone connoisseur and don’t have much to say about the new harmonic content provided by the preamp. Even if I had a more discerning ear, a fair assessment would not be possible running through a Kustom KLA-10.  Although it still does not sound like an all-wood early seventies Suitcase model, I am able to get a noticeable amount of expression from the keys that was either difficult or impossible with the passive electronics.

I recorded a short video to demonstrate the preamp’s effect. The sound was recorded using the camera’s built-in microphone so the video does less to demonstrate the tonal qualities as it does the differences in output levels. The video focuses on the controls of the piano. On the cheek block, the first switch controls both the DC power and also whether to send the signal through the preamp (Up) or around it (Down). The middle switch selects between the original capacitor (Down) and the choke (Up) for tone control.

I added a couple of .wav files to try to demonstrate the tonal effects of the preamp. I attempted to play the same piece of Recorda-Me, once with no preamp and again with the Tine Bomb turned on.

In a discussion on the Electric Piano Forum, Chris Carroll of Vintage Vibe advises that when ordering a Tine Bomb, you can specify that it will be installed in a Fifty Four and they will make the necessary adjustments so that it can handle the increased signal strength.

One thought on “Tine Bomb Preamp”