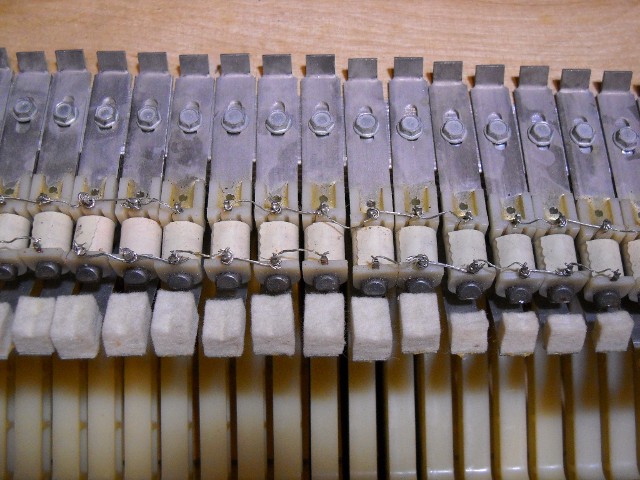 As mentioned in my last post, my latest Seventy Three is the first Seventy Three I’ve ever played, the others being unplayable since I’ve received them. It’s also the first time I’ve gotten to hear a Mark I in person and boy does it sound good. My trusty Fifty Four sounds downright sterile next to it. The Seventy Three is thick, chimey and a little temperamental in that you’ve got to apply more finesse to properly manage the available range of timbres.

I’m determined to figure out what gives the older piano its superior tone. The construction of the 1976 model is very similar to that of the Fifty Four. The keys are wooden, the hammers are all plastic, the harp frame is aluminum, the tone bars are of the same design and I’m fairly certain the tines are the same Torrington-made items. The most obvious difference is in the way the pickups are wired.

Probably because people were unhappy with the low signal strength of the traditional Rhodes pickup wiring scheme, the Fifty Fours were wired so that all of their 54 pickups are in series with each other. With 54 roughly 185 ohm pickups wired in series, the output at the jack measures somewhere in the neighborhood of 10K ohms – closer to the level of most other electric instruments that may be sharing the stage. One of the tradeoffs of increasing the signal in this way is a loss of some of the fidelity of each pickup. The high frequencies are lost and the sound becomes kind of muddy and homogenous.

I don’t mind turning the volume knob up on my amplifier to compensate for a weaker output. I’d rather be able to hear the full character of the pickups and to that end, I decided to rewire the Fifty Four to match the layout of the Seventy Threes. There may have been other wiring schemes used, but all three Seventy Threes I’ve got were wired the same way: groups of three pickups (one group of four because 73 isn’t evenly divisible by three) in parallel joined in series to each other. This results in an output of about 1.3K ohms.

Access to the pickup lugs is mostly obstructed by the tone bars suspended above them. To make the rewiring process easier, I first removed the tone bar rail from the harp frame. To convert the series wiring to parallel groups, jumpers were added between trios of neighboring pickups. This involved stripping a bunch of 22 gauge hookup wire, cutting it into short pieces and soldering each length to the lugs.

After adding the jumpers, the total output came to 1.25K ohms. Doing the math (185 / 3 * 18), it should have only been around 1K. A while ago I rewound six dead pickups with the incorrect gauge wire and they’re significantly hotter than the originals providing a boost to the total circuit’s reading.

Comparing a recording made before the modification to one made after, I’m pretty sure I hear a difference. It’s still nowhere near the sound of that Seventy Three though so this will bear further investigation.

One advantage of the rewiring is that the signal no longer overloads the input of the Tine Bomb preamp I installed. When it was cranking out 10K ohms, it was impossible to get a clean sound from the preamp. Now, it seems to be operating more within its comfort zone.