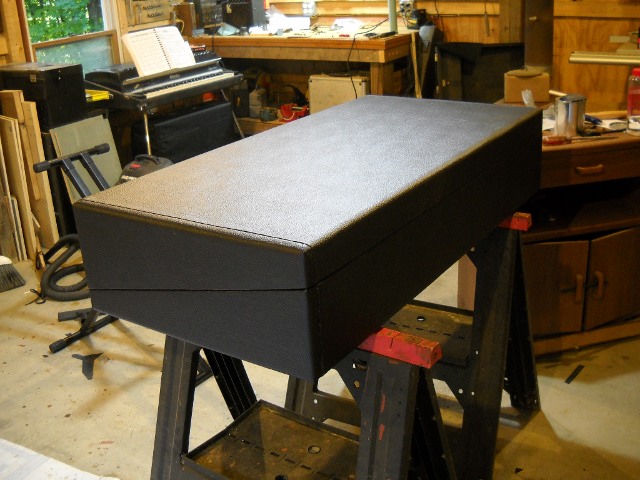 Using one of the old pieces of Tolex as a template, I began by cutting the sides from the new material. I decided against trying to use any of the old face pieces as templates as they were too torn and brittle to work with.

I worked on the bottom half first. With no leg compartment and only one face surface to take care of, it would be a simpler job to start out on. I thought it might be easier to spread the glue with the case hanging from a roof truss. This turned out not to be the case and when I got to the top half, I didn’t bother with that apparatus.

I applied the Tolex glue liberally to both the case and the fabric using a small 4″ paint roller and a foam brush. After waiting about 15 minutes for the glue to become tacky, I applied the first end piece. Although it went on well enough, I was a little concerned that the glue wasn’t holding as well as it should. The glue is touted as having an extraordinarily long working time (like days or even a week) but as the job progressed to the face piece, its poor short-term performance was making things a little frustrating.

I found the screen repair tool I had to be very useful in creating tight inside edges.

I spent a while trying to smooth the flat surfaces and keep the edges tight but eventually decided it was an act of futility and left it for the night. By the next morning things were looking up. The glue had finally agreed to display its adhesive characteristics and I was able to touch up a few trouble spots from the night before. As further time passes, the glue seems to be improving its bonding strength and I’m more confident now that it will mature to an appropriately semi-permanent finished product.

All in all, I’m pretty happy with the way things turned out. There were a few victories and a couple of lessons learned. I started with four yards of Tolex and had only barely enough to cover all surfaces.