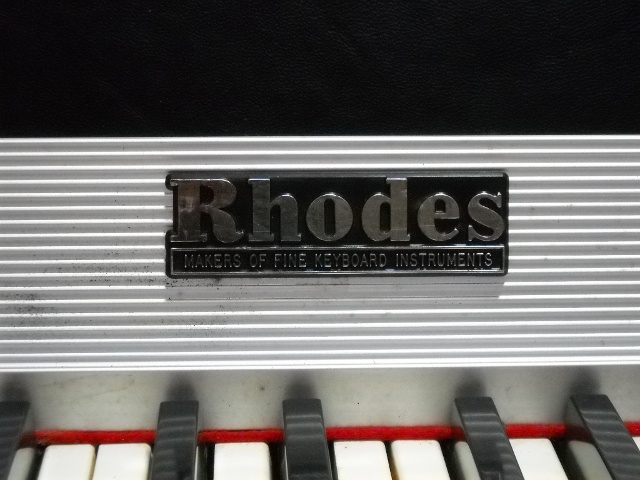 The third Seventy Three I’ve owned has turned out to be the first one I’ve ever played. The eBay listings of all three pianos have been sort of “sight unseen”, or “sound unheard” as it were. None of the sellers have known the histories and all were unable to say whether the pianos were playable. So it was a pleasant surprise to find that the most recent purchase was of a fully-functional Mark 1. While there’s still plenty of room for improvement, I’m at least now able to play a tune through without having to avoid dead notes or hear the popping of tines colliding with their pickups.

Like the last one, this piano includes all components except the leg brace knob and the vinyl leg bag.  Damage to the case is minimal including a few minor tears in the Tolex and a mangled corner brace. Some of the case hardware has made it through the years with its plating intact while other pieces show some amount of rust. On the inside, the name plate has been scratched up but the harp cover is remarkably unscathed. All tines and tone bars are present and accounted for. A few tines have got a minimal amount of rust growing on them and the bars and harp frame will need their zinc plating refreshed.

The interior bears several pieces of evidence that this Rhodes has been serviced at some point in its life. In addition to several sets of initials scrawled on the keys, someone wrote out a key reference on the underside of the harp. Maybe someday I’ll realize the benefit of adding those marks to the harp but for now, it seems like defacement. The plywood appears to be unfinished underneath so I’m hopeful I can sand down through the marks but they were clearly made with a wet ink that may have penetrated too far.

Up to 1978 Rhodes manufactured pianos with their original, unimproved action. Until they started contouring the key pedestals, playing a Rhodes was like wading through deep snow. Fortunately there’s a relatively simple remedy in the form of what is commonly called the Miracle Mod. This involves adding a small bump to the pedestal thereby dramatically changing its interaction with the hammer. The effect is a quicker, more responsive action with a feel that is closer to that of a regular acoustic piano.

Other than being sluggish, the action on this piano is in decent shape. It includes a full set of what are likely replacement hammer tips. Some obstruction has found its way under the lowest G flat key and holds it a bit higher than all the rest. The contact between key pedestals and the undersides of hammers is buffered by strips of felt. On most pianos, the felt was applied to the key pedestal but for some period of time, the hammer got this treatment instead. This 1976 model fell into that category. I’m not sure, but I think the felt may need to be switched to the pedestals to facilitate the Miracle Mod improvement.