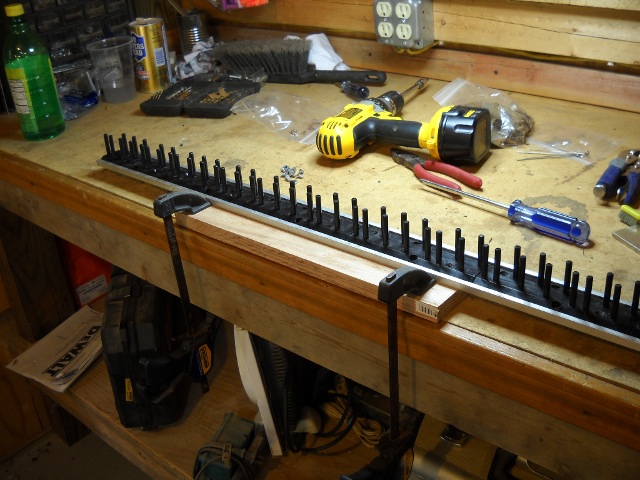 I knew when I first saw them that the key guide pins were fragile. Obviously, they would require careful handling and storage while they were outside the case. It was with this in mind that I began cleaning their aluminum rail and promptly broke two pins. And then I broke one more.

I don’t know where I can get replacements for these. There’s a seller on ebay that has the balance rail pins but not the front guide pins that I’d broken. My only option was to attempt a repair. When an unorthodox repair procedure is called for, one of the first tools I usually reach for is a torch and this job was no exception.

I heated up a picture hanger nail and used it to poke a hole in the plastic base. I also used the hot nail to kind of center-punch the underside of the pin. A drill bit was used to finish the hole in the pin.

My plan was to drive the picture hanger nail up through the base to support the plastic pin. The nail head protruding from the underside would prevent the pin base from sliding into the aluminum channel so I melted a little divot to allow the nail to sit flush.

The hole I’d drilled in the pin was slightly smaller than the diameter of the picture hanger nail. After pushing the nail through the base, I carefully heated its tip and pushed the pin down over it. The plastic melted just enough to provide a surprisingly snug fit. The repaired pins were sturdy and ready for action.

One thought on “Key Guide Pins”