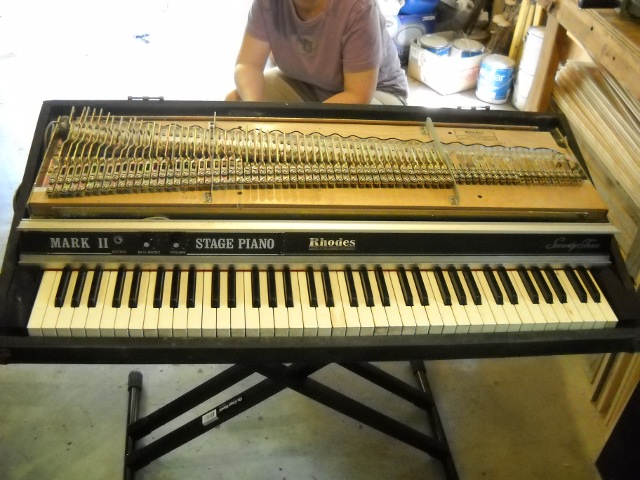 eBay is chock-full of Rhodes pianos and I immediately found a good prospect. It was definitely in poor condition but still had all of its components (although no legs or sustain pedal).

The seller posited that the piano had gotten wet at some point in its life and, after examining it in person, I’d have to agree. Much of the Tolex was damaged and peeling and some of the metal inside was a bit corroded. The threads of many of the screws that secured the case hardware showed that they had spent some time steeped in damp wood.

When I hooked it up to an amplifier, I was pleasantly surprised to hear sound coming out of most of the pickups. Only one tine was actually broken, although more will likely need to be replaced. Almost every tonebar/tine was completely out-of-whack, some pointing nowhere near their respective pickups while others pushed directly up against them. Apparently one tonebar had gone missing at some point and was replaced by a mismatched unit. The repairman re-bent the incorrect tonebar to make it resonate at a frequency closer to what was intended. Also, someone removed half of the upper-register tonebar screws. I’ve seen this modification before and believe it to be an attempt to allow the tines to travel more to better produce the trademark growl on hard key strikes.

The piano was not supplied with either its legs or sustain pedal hardware. Unfortunately, those items are expensive to purchase – either originals or aftermarket reproductions. I’m not concerned with maintaining only original components so I’ll be keeping my eyes open for options.

Being a relative novice to the world of Rhodes pianos, I was a little surprised to see that the keys were completely plastic. Even my late-model 54 has wooden keys. This doesn’t concern me too much but I’m sure these plastic keys are considered less desirable than the wooden ones. This also means that the guide pins are plastic and the keys do not employ felt bushings where they contact the pins. This is bound to change the feel of the instrument and I’ll be interested to compare it to the wooden keys when it’s playable. Given the piano’s history, the plastic keys are probably a blessing. The soft wood of the older keys would certainly have soaked up any moisture that had gotten near them.

One thought on “Waterlogged”