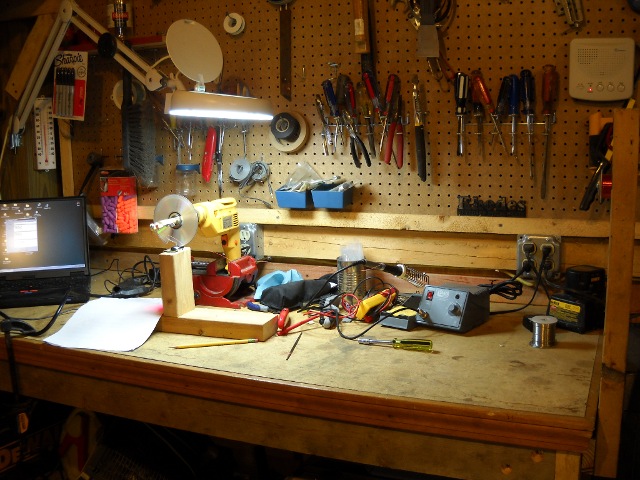 With their delicate, hair-thin copper wire, Rhodes pickups are particularly vulnerable to the dampness that only caused cosmetic damage to the rest of the piano’s components. After a pickup was wound at the factory, it was generally wrapped in plastic tape to protect the wire. Earlier pianos that I’ve seen were wrapped with clear tape while in later years, opaque white tape was used. The consensus seems to be that the pickups wrapped in white tape are more prone to broken internal connections rendering them completely dead. My guess is, it has nothing to do with the tape itself but probably the grade or type of wire used to wrap them. Even for a white-tape unit, this piano had more than its share of deads.

As pickups were removed, they were each tested. The good ones measured consistently in the low 190s which is right about where they should be. Others didn’t report any continuity at all and by the time I had removed the first twenty pickups, I knew by the size of the reject pile, I was going to have my work cut out for me. By the end, I had 46 working pickups and 27 out of commission.

I’ve wound Rhodes pickups before. My Fifty Four also features white-tape pickups and so far, six have expired on me. When I did those, I judged the amount of wire to use by measuring an original pickup’s diameter and comparing the new one. I have no idea how close I came to the correct number of wraps because it turns out that the 42 AWG wire I used was much thinner than the original and I ended up with a pickup that read over five times hotter than it should have. This time I was able to get some proper 38 gauge wire but I still wanted a better way to calculate the wrap count.

While looking for counting mechanisms on-line I saw some mention of using a computer mouse. The center scroll wheel on most mice uses an optical sensor to determine when the wheel has been moved. This can easily be re-purposed to count revolutions of a pickup winding spindle.

To replace the mouse wheel’s little pinwheel that serves to alert the optical sensor to movement, I went with a CD-ROM. I cut a small notch in the edge and mounted the disc to a hanger bolt with some washers and nuts. Next, a mounting block was made to hold the pickup as close to the center of the rotational axis as possible. The mounting block was screwed onto the wood-threaded end of the hanger bolt and the machine-threaded end was chucked into a hand drill which was clamped into a vise. The mouse sensor was just stuck to a two-by-four and the height of the drill was adjusted until the CD-ROM passed between its eyes. Now, for every rotation of the pickup, the sensor would see one brief glimpse of its sending unit and send a single movement signal to a computer.

To use the output of the mouse sensor, I wrote a small Visual Basic program. In addition to showing the number of rotations, a target can be specified and it will also show a count-down and a progress percentage (hmm.. maybe I’ll add a progress bar). An audible alarm would be very helpful so that I don’t have to take my eye off the pickup. I started to add a beep that increased in frequency as the target approached but ran into a little issue and set that aside.

The counter works amazingly well. I first tested it a few times by making around fifty to seventy wraps with string then manually auditing the count. When I started wrapping pickups, it took a few tries to arrive at a good number but it seems like 3,100 puts me in the best range. The first was a little low, the next a little high and the third was just right.

Before winding each pickup, the previous wraps were removed with a box knife. This actually turned out to be the most tedious part of the job. It was difficult to avoid damaging the plastic bobbin with the knife.

I don’t do much de-soldering and don’t have the proper tools for it. Besides that, I like to keep the number of times I heat up the lugs to a minimum as the plastic they’re mounted in tends to soften easily. So, instead of melting off the old solder, I used a small nipper to trim the lugs. This was important as any little snags can easily catch the wire as it’s being wrapped.

Even though pickup wire appears to be uninsulated, it actually is covered in any one of several types of coatings though I think generally either polyurethane or enamel is used. I believe I’ve heard that Rhodes pickups were wrapped with enamel-coated wire but I think my wire is poly. Either way, the insulation was first scraped off the end of the wire before it was wrapped around the lug to ensure good conductivity. The beginning of the wire is wrapped around the first lug – the one closest to the pickup’s mounting tab. Wrapping it clockwise around the lug helps the wire find the groove in the bobbin allowing it to reach the hub without obstructing the subsequent wraps. To wrap the wire around the bobbin in the correct direction, the drill was run in reverse.

Note: this is not the proper method for controlling the speed of an electric motor. A common dimmer switch will eventually cause the drill motor to self-destruct.

I found that to get the correct number of wraps onto the bobbin, I had to make them pretty tight by pinching the wire between my fingers as it ran off the spool. The spool was mounted a few feet away, oriented so that the wire fell off the end rather than unreeling by spinning the spool. With this heavier wire it probably would have worked either way but lighter gauges may not be strong enough to handle the load of trying to turn the spool.

Using this setup, I’m able to wind a pickup from start to finish in about ten minutes. Again, the most time-consuming part is probably removing the old wire. Otherwise, it’s a pretty easy and fun job.

There are a couple of videos on YouTube. One of the counter being tested and another clip of an actual winding job.

The counter program can be downloaded here. It’s just an executable and doesn’t use any special libraries so it shouldn’t need an installer. Just download and run.

The source code for this program (much of which was copped from somewhere on the web) can be downloaded here. It’s written in Visual Basic 6.