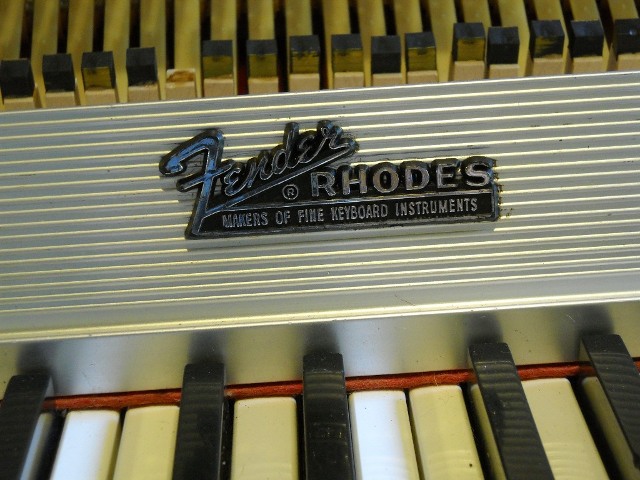 When referring to these pianos, most people say “Fender Rhodes” even though the Fender name only appeared on units for 9 of the 22 years they were in production. According to the Fender Rhodes Supersite, there were no changes to the piano’s construction that coincided with the dropping of the Fender name. So for all practical purposes, there is no difference between a Rhodes and a Fender Rhodes. Regardless, I wanted one with badges that included “Fender”.

Once again, eBay came through for me and I paid what was probably too much for a 1973 Seventy Three Mk I. The seller had acquired it at an auction at a university where it had been in storage for many years. Like the last eBay purchase, this one included all components. This time, it even included the legs and sustain pedal. The only things missing are a few pieces of case hardware, the knob for the leg braces and the vinyl leg bag.

In 1973, Rhodes were built with wooden harp supports instead of aluminum. The hammers were “hybrid”, made up of both plastic and wood. What I don’t know is whether the damper felts are extremely misshapen or were designed to partly wrap around the tine like on an acoustic piano. The pickups on this one were wrapped with a cool green wire. I’ve had to re-wrap six pickups on my 54 so I was surprised to find that this one, like the last 73, seemed to have all of its pickups intact.

The case and Tolex have a few road scars and had been outfitted with some aftermarket latches. I don’t even know how double-hung window locks could have held the case closed. A few tone bar grommets have blown out and some hammer tips are missing but other than that, the interior is in pristine condition.