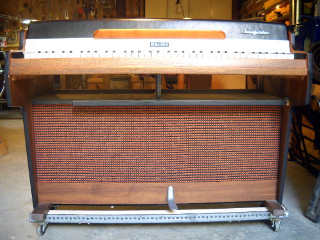 The Keyboard Music Center or KMC 1 is among a set of models called Student Pianos as they were produced to fulfill Harold Rhodes’s dream of classrooms where his “Rhodes Method” of piano instruction might be taught. This is a console model made to look like a piece of furniture that wouldn’t be out of place in a living room.

This piano was brought down from Indiana where it lives at Off the Cuff Sound, an all-analog recording studio. Although it does play when the signal is taken directly from the harp, its internal amplifier was removed before it was brought to me.

I’ll be giving the action an overhaul which will likely include a Miracle Mod installation. I may also try to make a few cosmetic improvements but the official job will focus on the functional components.