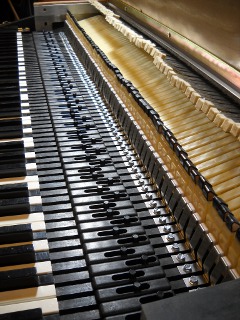 2016-04-02 – This is a modification I no longer perform. Although the back checks do work as advertised, the improvement in playability is minimal and they require such precise adjustment that I’m afraid they’ll turn into a liability over time.

The action on a Rhodes piano is a dramatically simplified version of the same mechanism that converts a key press into a hammer strike on a traditional acoustic piano. Although Rhodes was able to remove all but a few essential pieces of the more complex action while still maintaining an acceptable feel, one part many wish they hadn’t omitted is the hammer’s back check. Without a back check, hammers tend to bounce after hitting a tine and returning to the key pedestal. When a hammer bounces, it causes two problems. Since the hammer is tied directly to the damper, a bounce pulls the damper away from the tine momentarily allowing the note to ring a bit longer than it’s supposed to. Additionally, while it’s bouncing, the hammer is not properly positioned for a subsequent key stroke and a great deal of efficiency is lost. This can make playing fast passages a hit-or-miss proposition.

Manufacturing your own simple back check system would not be too difficult but for those not interested in spending time reinventing them, Vintage Vibe offers their own solution for sale. The kit consists of a set of metal tabs, pre-cut self-adhesive felt strips and a set of the same type of screws that are used to mount the piano’s pickups. The idea is that the tabs are screwed to the tops of the keys so that the attached felt strips provide a landing pad for the hammers. In their instructional video, they indicate that the tabs are pre-bent to fit an early model piano with “hybrid” half-wood and half-plastic hammers but that for other models, the bend angles will need to be adjusted. For both of the late-model pianos in which I’ve installed these, I’ve had to significantly change the shape of the tabs so that they can reach the hammers.

To start off an installation job, single back checks are installed on the highest and lowest keys. These two are then used as references for a pencil line to mark the locations of the remaining pieces. Unfortunately, for the very first back check, I slightly missed the mark and it would not reach its hammer. Since moving the screw such a small amount was not an option, I used a file to enlarge the hole in the metal tab allowing me to scoot the tab forward enough to fix the problem.

After the reference line is drawn, the rest is a matter of bending, affixing felt and installing 71 more times. Although the back checks can be installed without removing the keys from the piano, I opted to perform the task in good light on my bench. In their video, Vintage Vibe shows the mounting screw being driven with no pilot hole while the narrator declares that the soft wood will accept the screw with no prior introduction. When installing these on my wooden-keyed Fifty Four, I found this not to be the case and quickly resorted to drilling pilot holes to avoid splitting any more wood. I drilled pilot holes in all of the plastic keys of this Seventy Three.

As they’re being attached to the keys, each back check must be fine tuned to provide the correct degree of support for the hammer. The allowable tolerance is almost impractically tight as the felt must prevent the hammer from bouncing while also allowing it to fall freely to its proper resting spot. Finding the perfect angle to accomplish this can be a bit frustrating but is do-able. This adjustment is much easier to perform individually as each back check is installed rather than after they’re all in and access is blocked by neighboring keys on both sides.

After installing the last back check, I was left with a handful of extra metal tabs and even fewer screws and felts. The extra tabs are important because the process of developing and practicing the perfect bend pattern incurs some casualties.