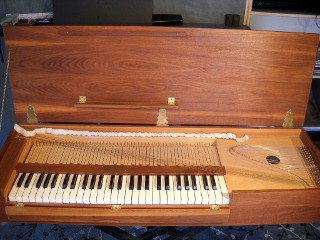 For the past year, I’ve been focusing heavily on playing JS Bach. It’s my hope to eventually record the entire set of the Well Tempered Clavier Book 1 on Rhodes pianos. While studying these and other pieces, I became interested in the sorts of instruments Bach might have actually played when he was alive. One such instrument is the clavichord.

The clavichord is an exceedingly simple instrument. The action consists of only the keys and the brass hammers called “tangents” that strike the strings. Each tangent both imparts energy to its string and acts as a sort of fret allowing the string to vibrate only for the length between the tangent and the bridge. When the key is released, the string is allowed to vibrate for its entire length whereupon felt woven into the strings behind the tangents immediately absorbs any remaining energy.

This simple action produces a unique tone that is closer to that of a harpsichord than a modern acoustic piano… but it doesn’t produce much of it. Clavichords are very quiet instruments that were used for personal study or very intimate performances. Even though I was aware of their reputation, I was still surprised by just how quiet this instrument is. And though it would likely offend the sensibilities of many historic instrument enthusiasts, I plan to install a soundboard transducer of some sort so I can use an amplifier.